The "Mother" church for our Parish was established St. Mary'sin Stevinson, CA in early 1916. The lot was sold to the Archbishop of San Francisco on January 31, 1916 for two gold coins valued at $10. Fr. John Maiztegui and Joseph Baumgart of Stevinson completed the construction of the church for a cost of $4,000. They were helped by many citizens of the community with private donations being the major source of funds. On September 29, 1918 at 11:00 a.m. Archbishop Hanna dedicated the church in what was described an interesting ceremony. From that day masses were scheduled for every second Sunday at 10:30 a.m. St. Mary's was first called the Mission of St. Joachim's in Newman until 1925 when it became a parish in its own right. Fr. Pantaleon Triana served as the first Pastor. Additional lots were purchased in 1954 and were used as a parking lot. In 1974 the remaining 8 lots were purchased which is where the hall and parking lot now are. In 1992 St. Mary's began her makeover which was made possible by many dedicated parishioners working tirelessly. The original stained glass windows were recreated, the inside was re-textured and repainted. The mural was restored and new heat and air system was installed. The confessional, entry and choir loft were also given a face lift and new carpet installed. The doors, paneling, molding, pews and doors were all replaced with beautiful oak and new landscaping and sidewalks were installed. The final addition was a shrine in honor of the "Good Shepherd" on the grounds just south of C.C.D. building. 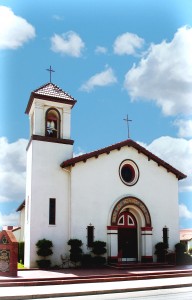 The Holy Rosary Parish was established in Hilmar in May of 1948. The first Pastor was Father Patrick F. McHugh who remained for ten years during which time the Church and Rectory were constructed. The original Church foundation was laid in July of 1949 by contractor Estes L. Jordan of Los Banos. The construction contract for the project was $47,900. The one acre site on the corner of Cypress Avenue and American Avenue had been donated by Mr. and Mrs. J. R. Griffin. The church opened on the first Sunday in Lent, 1950 and was dedicated by Reverend A. J. Willinger, Bishop for the Diocese of Monterey - Fresno on October 7th, 1951 on the Feast of the Holy Rosary. The marble altar was imported from Italy for $10,000 and installed in Holy Rosary Church in April of 1963. As the Hilmar Catholic community grew so did church facilities. At first a Rectory was added in 1953; constructed by volunteer & skilled labor for $ 12,000. The Rectory, which since had been added on to and remodeled multiple times, now serves as the Parish Office. The Parish Hall was started in 1957 and was constructed on an adjacent parcel purchased for $500 from Mrs. Teresa Morr. The project was completed in 1958 for a total cost of $23,800. The contractor is unknown. In October of 1960, Father Patrick Doherty arranged for the Parish to acquire an adjacent 9.3 acre parcel from John "Jack" and Louise Vierra. That property completed the parcel 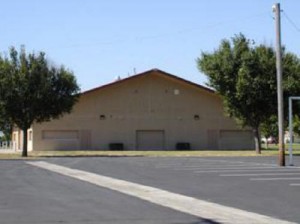 that we see today. The southern half of the Holy Rosary campus has provided the local community with soccer fields and open space for decades. It is perhaps the Parish's greatest asset. The Parish continued to expand their facilities with the construction of the Classroom Building for C. C. D. education. That project was completed in April of 1971 , built by Frank F. Souza for $42,000.00. There are four classrooms. The last building added was the Recreation Building completed in 2002. The project is a pre-engineered metal building and is a multi-use facility used for storage, assembly and the annual Festa.

In 2004 and 2005 our parish realized a need for an expansion. The Sunday morning 10:00 AM Mass had standing room only crowds on a regular basis. The leaders of the parish began an exploratory committee to research how to best serve the growing attendance. The committee explored the idea of remodeling the existing church, but found it to be impractical. The parish, having available open acreage on site, would best be served by building a new and larger church. In 2006, after many prayerful meetings and research, the Committee unveiled the plan to the parish and the first “Preserving Our Past… Building Our Future” capital campaign was launched. The faith of our parishioners was evident in their support of the capital campaign and the individual organization of several significant fund raisers. God’s answer to the committee’s prayers!

The continued faith of our community brought forth ideas and opportunities for several other signature fundraising programs. The Holy Rosary/St. Mary’s “Legacy of Faith” program enabled individuals to include their loved one’s memory in our project, many using this as a means to replace floral arrangement gifts with donations to our building fund. “Pennies from Angels” was also established to give our children the opportunity to donate to the new church by filling their parish supplied piggy banks and dumping them during mass on the last weekend of the month. This program has raised $31,324.00 to date and continues today by popular demand. It has been instrumental in keeping our little ones enthused about the building of a new church. In 2011 a monthly second collection benefiting the Building Fund was implemented for those who were uncomfortable participating in the capital campaign, but still wanted to be included. The Save Mart Corporation’s S.H.A.R.E.S. program has been a successful addition to our fundraising efforts. Parishioner’s shop at the corporation’s stores using their card and the parish receives approximately 3 percent of their purchases on a quarterly basis. The fund has earned over $90,000 to date. As our faith moved us forward, these and other fundraisers kept us on our path.

On November 1, 2009 Bishop John T. Steinbock blessed the new church site with an outdoor Mass held on the actual site of the future church with approximately 700 parishioners in attendance. All lined up on the drawing of the perimeter where our new church would someday be build. November 2, 2009 the site-work construction began. A year and just under $1,000,000 later Holy Rosary had new parking lots, drainage, and lighting. Having seen the answers to our prayers begin to materialize, our renewed enthusiasm spurred a second campaign of fundraising.

Several years passed with our new parking lots, drainage system and new church pad in place. The committee was then faced with a bid for the building that was much higher than first estimated. Father Hilary gave the committee a two month break, took them on retreat to the Monterey Mission at which time they were able to meditate, renew our faith and pray for the future of our project. This turned out to be a huge turning po 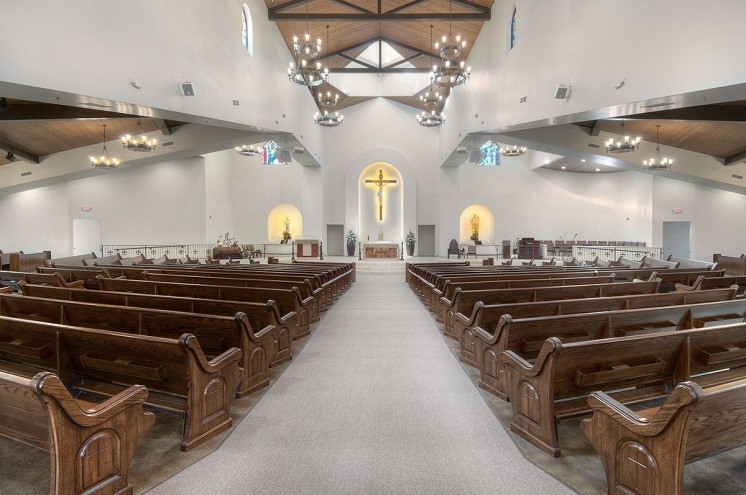 int. In a renewing of the committees commitment, new ideas emerged. During the summer of 2012, the committee decided to open up the bidding process again. In November of 2012 a new bid was received and accepted from Berry Construction of Madera. The project was once again ready to move forward.  January thru March of 2014 the pad preparation began for the new church, with the first cement being poured by Berry Construction on March 21, 2014. It was a whirlwind of activity. Our parishioners and the community were excited by all of the activity and funds continued to come in in support of the building fund.

Stained glass windows were located in a warehouse in the Diocese of Pittsburg. These windows were not included in our budget, but once again the faith of our parishioners and a three week campaign, we collected over $200,000. This beautiful window addition to our new church is a testimony to the generosity of our people. So many times during the process of building the new church we were reminded of God’s goodness and care. For God provided what was needed, when it was needed. On October 7, 2015 the church opened its doors with a Community Celebration for the Holy Rosary New Church. Over 1200 people were in attendance. The Celebration welcomed the community in a spirit of Thanksgiving for all that the Lord had provided for us. We are blessed to live in a community who wanted to see this project completed, regardless of their religious preferences.

The Rite of Dedication for Holy Rosary’s new church took place on Tuesday, December 8th, 2015 on the Solemnity of the Immaculate Conception of the Blessed Virgin Mary and the Inauguration of the Extraordinary Jubilee Year of Mercy. With over 700 people in attendance the new church was blessed by the Most Reverend Armando Ochoa. Eighteen members of the clergy, including clergy from our neighboring parish in the diocese of Stockton were also in attendance. After the Dedication Mass all were welcome to a dinner of chicken and tri-tip. Many parishioners expressed that this was a once in a life time experience and they were so very excited to be a part of it. Having realized the answer to our long journey of prayer and faith, has created a renewed spirit in our parish community.